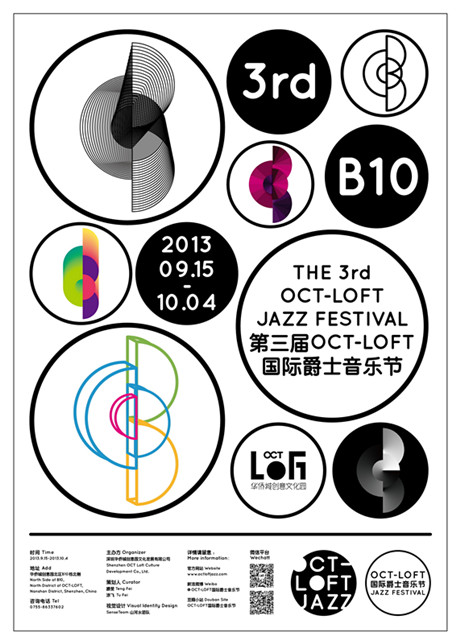 The 3rd OCT-LOFT Jazz Festival will be open on Sept. 15th. This festival has begun to take shape and has some influence after the continuous effort of the last 3 years.

Last year, one of the audiences coming from far away told us that among all the music festivals, that is a lot, he had been to, he enjoyed the feeling of “listening to new music in the old factory building” the most. And that is exactly the charm of OCT-LOFT which combined factory building, art and music together perfectly and brought out magical chemistry reaction.

Our lives are filled with various kinds of music festivals, and they are just as confusing as the Spy series on TV. But almost all the music festivals have the same destiny: they just come into emergence massively and come to the end hastily. The content of those music festivals are almost the same and lack of creation. The musicians seem to be busying flying around performing, but in fact they are just like attending some kind of fancy don will, and they may end up being the chessman of the operators and the fast-food of the music fans. Popularity has now became the first consideration of all kinds of music festivals while the musicality has been squeezed to an awkward edge and became the end of the consumption food-chain.

The great Jazz musician Charlie Parker once said,”Music is your own experience, your own thoughts, your wisdom. If you don’t live it, it won’t come out of your horn. They teach you there’s a boundary line to music. But, man, there’s no boundary line to art. ”  The only thing we can do is to minimize or even give up the idea of making money, and only in this way can we really rest the root of the artistic music.

So we just came up with the idea of making a music festival in which you can really listen to the music quietly. Over 100 musicians will be coming from different countries and places all around the world and present their most amazing musical works to the audience during the 20 nights of this music festival. The names on the list include some really prominent masters and some young talents with great ambition, but there is only one standard of the selection: the uniqueness of their music. They focus mostly on presenting their music rather than pleasing the audiences. The most important point is that we have a bunch of great fans who are now more open and inclusive even though they have become more picky after all the participation for the last few years.

Birds of a feather flock together, and it will really be our success if this festival can develop its own style and taste.

And the only thing we should stick to is to gather our passion and conscience, tie them up as torches and throw them towards the crowd no matter what it will take.